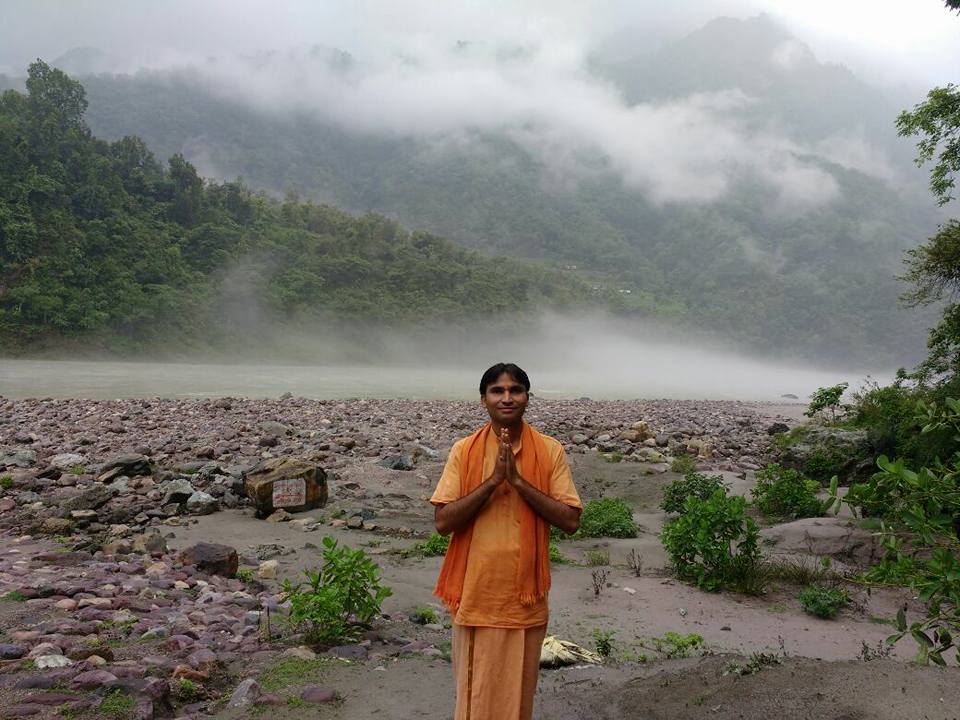 Krishna has been a traveling yogi and a Brahm Yoga® Teacher from the last 10 years, sharing his teachings and experiences with aspirants all around the country. He has been teaching Holistic, Integrated Authentic Yoga to Individuals, Foreign Tourists, Corporates and Institutions.

Krishna, hailing from a family of traditional Yoga practitioners Brahmin family in North India. He learned Yoga techniques at the age of 10 from his Grandfather who was a Yoga Guru/spiritual healer and regular Yoga practitioner under the guidance of Great Yogi Brahmrishi Geetanand Saraswati at “Baghol Muktidham Tapovan” and “Himalayas”.

After post-graduation in Finance, he spent nearly 15 years as a finance professional and Sr. Management team member, working in various Government/NGO/MNC and other corporate organizations going through the stress and strain common for all working professionals. His Grandfather (Swami Shankaranand /Guru Ji) motivated him to follow critical path of spirituality and Yogic Sciences.

At age of 15, he went alone in the cave of Brahmrishi Geetanand ji situated in Aravalli Hills near Baghol Muktidham-Tapovan. During Meditation, he realized magical magnetic attraction and divine peace. This magnetic attraction and divine peace during meditation kept bringing him back on his Yoga mat. It was a place where he always found peace and serenity regardless of what was happening in his life. Since his childhood, he continued practicing with master yogis and saints at Brahmrishi Geetanand Sanyas Ashram while working in the corporate world. He spend all the weekends and holidays in Ashrams or cave or jungle situated in hill range of Vindhyachal/Aravallis/Himalayas to meditate and self-realization. Krishna was bestowed with Brahmchari Deeksha by Swami Chetnanand Saraswati, the peethadheeshwar at Brahmrishi Geetanand Sanyas Ashram, Raiseena, Aravalli Hills.

After serving in corporate world as Head Finance (CFO), during 2013 Krishna left his career to begin his journey at path of spiritualism to deepen his understanding in spiritualism, yoga and meditation. He further continued his spiritual study under guidance of Swami Chetnanand Ji Saraswati (Disciple of Brahmrishi Geetanand ji Saraswati). At the same time, he had a mission to serve and love to the people and communities in the world. He spend all his time volunteering in Ashrams, temples, orphanages, and gaushalas/animal care centres in India. Wherever he travel, he teach karma yoga to those whom he meet along the way.

A big part of Krishna’s teachings comes from the year he spent volunteering full time in yoga Ashrams under a Gurukula system. For a whole year, he followed a strict and disciplined yogic lifestyle in the Ashrams where he selflessly taught yoga and assisted for yoga trainings. Not only did that deepens his knowledge in traditional hatha yoga, but it also helped his develop unconditional love, patience, and compassion for his students.

These training strengthened his knowledge in teaching a wide array of yoga styles to practitioners of all levels. Aside from Yoga, he has also taken intensive diksha in Pranayama, Meditation, Shrimad Bhagwat Geeta, Upnishads, Spiritualism, and Spiritual Enlightenment Therapy. Krishna brings a holistic approach in his teachings by using healing, therapeutic, and breathing techniques to suit the needs of his students. Through his experiences, he saw how Yoga can benefit everyone by improving the physical, mental, and spiritual well-being of each individual.

He experienced that Ancient Brahm Yoga can empower aspirants to attain the super conscious state of mind with internal happiness, peace and ultimate bliss.

With inspiration of his Guru, Krishna decided to conduct Research in Ancient Yoga at various prominent International Research Organization.

Krishna is forever grateful for all the teachers who have planted seeds of wisdom in him and for all the spirits/angels who have guided him to where he is today. He truly believes that his life’s work and greatest passion is to share the gift of Yoga to all.

Krishna is the member of “Brahmrishi Geetanand Ashram” which is running Yoga, Spirituality and various humanitarian projects in India.